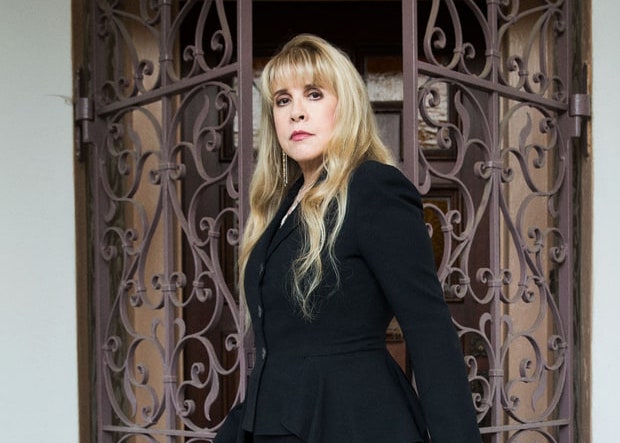 Stevie Nicks has been having trouble sleeping. The Fleetwood Mac vocalist wrapped up a year-and-a-half long tour with her band last November, but even as she's begun rehearsing for a solo tour in support of 2014's24 Karat Gold that will launch in October, Nicks has yet to find herself on a better schedule.

"I've gotten into the habit of not going to sleep until somewhere between five and seven, and when I'm not working I can sleep until four [in the afternoon]," she reveals, blaming the tour routing schedule that had the band jumping between cities and time zones every other day. "I wish I had worked harder on it because now it's gonna be harder for me to, but I'll figure it out because I always do."

Even though she doesn't necessarily need to, the legendary vocalist and songwriter felt determined to get back on the road even after touring for so long with the Mac, who reunited with Christine McVie after a 16-year break. Just before McVie's return, Nicks had finished recording 24 Karat Gold, based on a collection of demos from throughout her career that she had personally cut from the various Fleetwood Mac and solo albums they were originally intended to be on. She spent two and half months in Nashville with friend and producer Dave Stewart recording the songs, and the same day she turned the album into Warner Bros., she entered a rehearsal room with one of rock's most iconic, formerly tempestuous line-ups.

"I didn't walk through the doors at the Fleetwood Mac rehearsal with Christine McVie sitting there after not having her in the band for 16 years and say, 'Oh, would everybody like to stay up and listen to my new record?'" she recalls with a laugh. "So never a word was ever spoken about it for the entire year and a half that we were on the road, so I never even got to listen to this record until we got back."

In the past few weeks, following a well-deserved break after Fleetwood Mac's trek around the world, Nicks realized that the window was closing for the appropriate time to promote the album. "These are the glory songs," she asserts. "These are the sex, rock & roll and drugs songs that I'm actually not really writing right now, and these are the songs I could never write again."

The "Wild Heart" singer's love of contrast is something she embraces in her daily life, too. "I always think an environment change will fix anything, so if I get depressed, I'm gonna leave my apartment and go to my house for a couple of days," she explains. Sometimes she'll do the same in hotels, too, needing to leave a beautiful suite for a room just down the hall. "All it takes is a new living room and bedroom for Stevie and she's a new person."

As she excitedly runs through plans for her upcoming tour, Nicks speaks with the infectious energy of a teenager preparing for their first gig. She first mocked up a list of 31 songs for the show, and when she presented it to musical director and guitarist Waddy Wachtel, he asked for her to cut it down. She's now at 30. "I'm like, 'OK, that's it. I'm not cutting these songs out,'" she says, noting that everyone will learn all 30 for rehearsals. "You never know which songs are gonna really work, so I can't make that decision, and I'm standing by my statement that I cannot choose the songs until we go into rehearsal."

Alongside 24 Karat Gold tracks, many of which she's debuting, she's thrilled to try "Wild Heart" live for the first time, as well as the title tracks off Bella Donna and Trouble in Shangri-La. "Gold Dust Woman," "Edge of Seventeen," "Dreams" and "Stand Back" are secured on the list, as well. She even has plans to connect 2001's "Sorcerer" to the newer "Belle Fleur," two songs that come from the same poem. "I don't really get tired of my songs," she says. "I'm lucky."

Even as she works on getting herself in bed by 10 p.m. – "which is totally ridiculous for me," she scoffs at her own suggestion – Nicks is looking forward to taking on another schedule that will keep her up late at night. "We're gonna go on for like two hours then we're gonna go and do what Prince would, which is then go find a club and play the other 14 songs," she says with a laugh, alluding to the inevitable cuts she's making to her set list. "It's all a lot of fun."

Bringing up Prince, who played on the original recording of Nicks' 1983 solo hit "Stand Back," puts the singer in a reflective mood. "I feel really sad that Prince's journey didn't continue until he was 95," she says. "Just so devastated, but I think that for most of us, we're all gonna live to be in our nineties. So a lot of this creativity and all the things I want to do when this part of my life starts to go away a little bit, then I'll be sitting down at an old typewriter that I'll dig out of my storage unit in Phoenix and I'll start writing stories. I'll start working on movies. There's so many things I want to do that this is just a part of it all. That's all I can tell you."