As she stood on stage at Talking Stick Resort Arena, addressing the crowd on the opening night of the 24 Karat Gold Tour, Stevie Nicks recalled an off-the-cuff remark she made some kind of special event leading up to the concert.

Then, on Tuesday, Oct. 25, her first solo outing since Fleetwood Mac finished the On with the Show tour last November, she reassured the fans with, "I just want you to know that I’m up here and I’m strong but I’m a little freaked out. Just a little. But I’m in my hometown, Phoenix, where I wrote a lot of my songs.”

As she said at the end of the night, “You’ve let me know that this is work and that I’m be OK. And I appreciate that. So take care of yourself. Stay strong. Don’t watch the news. It’s depressing.”

See? She’s funny, too. Not just sincere and gracious.

What makes this such “a very different show” is that she’s playing songs she’s never played before and others that she hasn’t touched in ages, setting the tone for the 20-song performance with the old-school Memphis soul vibe of a track she hadn’t played in 16 years, “Gold and Braid.”

“Bella Donna” was back the set list for the first time since the very early ‘80s, and four songs made their live debut – “Belle Fleur,” “Wild Heart,” “If You Were My Love” and the Buckingham Nicks song, “Crying in the Night.”

Nicks marveled at how long it’s been since that first album she recorded with then-boyfriend Lindsey Buckingham.

“Forty-three years,” she said, before recalling, “This was be the single off the Buckingham Nicks record. It was so long ago, I don’t actually remember if it ever was the single or made it out. I know I remember sitting in the basement and working this song out.”

She talked a lot, at one point joking, “Someday, I may do a show where I don’t even sing. I’m just talk.” And that was only after realizing how much she had been talking and telling the crowd, "You know, it’s like I’m not really supposed to talk this much.”

That’s the conventional wisdom, anyway. Keep the show moving. Or as people have been known to shout, “More rock, less talk.”

In practice? All that talking only serves to draw you deeper into Nicks’ world, creating a level of intimacy that’s hard to come by in a room that size. As Nicks said at one point, “I’m glad I was able to share this first night of trying to get this all in my head with you. You have been like great friends sitting in my living room listening to my new demos."

And those demos sounded great. Nicks’ voice was in beautiful shape throughout, and the musicians she’s assembled for this tour (including Tempe’s Al Ortiz on bass and Nicks’ longtime musical director Waddy Wachtel on guitar) did a brilliant job of fleshing out the songs, from the bass-driven groove of the opening numbers, “Gold and Braid” and “If Anyone Falls,” to the three Fleetwood Mac songs they played, “Gold Dust Woman,” “Rhiannon” and “Dreams.”

And as those Fleetwood selections would suggest, it wasn’t all about the road less traveled. In addition to those relative obscurities, they dusted off a handful of her biggest hits, including “Edge of Seventeen,” “Stand Back” and a beautiful, bittersweet “Leather and Lace,” her Don Henley duet, which featured gorgeous harmonies from Nicks’ female backup singers and brought the encore to a finish after one last story.

She also dusted off her other big ‘80s duet, the Tom Petty collaboration “Stop Draggin’ My Heart Around,” with Chrissie Hynde of the Pretenders standing in for Petty. It was great to see those two iconic artists share a stage, especially considering a quote I read from Nicks before the show: “When my manager said, ‘What about The Pretenders?’ I’m like, ‘Would they even go with me?’ And he said, ‘I think they would!'” 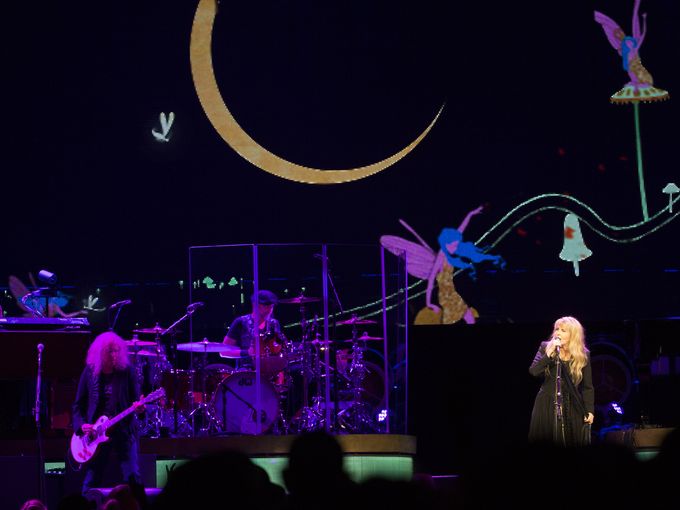 Of course they would. And Hynde was clearly thrilled to be there, joking “Yeah, we did our nails together” during the Pretenders set, which started off strong with two raucous selections from their excellent new album, “Alone” and “Gotta Wait.”

Hynde was rocking an Elvis Presley T-shirt and a pair of faded jeans (in stark contract to Nicks, with her dresses and shawls). The only other surviving member featured on that classic first Pretenders album, drummer Martin Chambers, was laying down the beat behind her.

This year's lineup also features a pedal steel player, who was put to brilliant use on a gorgeous, understated “Hymn to Her,” after which Hynde told the audience, “That one was for Stevie.”

The set was a good mix of crowd-pleasing staples and newer material, including “Down the Wrong Way” from her recent solo album, and “Holy Commotion,” the first single out of the box from the Pretenders’ new album, “Alone,” which somehow sounded even more contagious live.

And she wasn’t shy about returning to that first self-titled masterpiece. After blowing the dust off “Private Life” as the fourth song of the set, Hynde and her  made their way through a handful of ballads and mid-tempo pop songs – “Hymn to Her” followed by “Back on the Chain Gang,” “Don’t Get Me Wrong” (on which she struck a playful model pose to complement the lyric “If I come and go like fashion”) and “I’ll Stand By You.”

Then, Hynde announced “We didn’t really come here to do ballads" to introduce a four-song joyride through some highlights of that first release – a commanding “Tattooed Love Boys,” “Mystery Achievement,” the Kinks’ “Stop Your Sobbing,” and the song that may be destined to remain her calling card, “Brass in Pocket.”

The singer was clearly enjoying the moment on that one, investing the lyrics with the self-assurance they demand: ”'Cause I make you see / There's nobody else here / No one like me / I'm special, so special / I have some of your attention / Give it to me.” But she also made it more inclusive by sharing the moment with the fans down , holding the mike out for a fan to sing “I’m special.”

It was special. And it should have been to maintain that moment, but “Holy Commotion” was up to the challenge, and they followed through with “Middle of the Road,” which included a killer harmonica solo from Hynde, and the psychedelic funk of their cover of Jimi Hendrix’s “Room Full Of Mirror” from the “Get Close” album.

It was a spirited representation of what Hynde and her latest collection of Pretenders have to offer. And it was refreshing to see her connecting so strongly with so many people in such a big venue while reminding all the casual fans who may have drifted off after “Learning to Crawl” that she’s still special.