When I think of Nicks, three things come to mind: Fleetwood Mac, the sexiest voice on the planet, and magic, probably in that order. Even the way I had the opportunity to see Stevie Nicks and the Pretenders on Tuesday night at a nearly sold-out Talking Stick Resort Arena was magical — a last-minute assignment to review the show.

I was all in for the Pretenders alone. Granted, Chrissie Hynde is the only original, consistent Pretender here after many generations of different lineups, the newest being completely different from any previous incarnations. While original drummer Martin Chambers put in an impressive performance, he no longer records with with them. She even joked that they've been together for 35 years and "You only get twenty for murder." It's her , and it has been for some time. I was particularly excited because the Pretenders just dropped their first new album in eight years, Alone, last week. The set opened with the title track, which sounds like an ode to Iggy Pop with a hypnotic Stooges keyboard line. It was followed by the forthcoming single "Gotta Wait" and then by "Down The Wrong Way," from her 2014 solo outing, Stockholm. The first album deep cut, "Private Life," was something of a surprise, and the crowd loved every second of it.

Hynde slowed things down for a bit with "Hymn to Her," a beautifully haunting ballad, from the Pretenders' 1986 album Get Close, that she dedicated to Stevie. It was a dreamy number immediately blown away by back-to-back-to-back hits "Back On The Chain Gang," "Don't Get Me Wrong," and "I'll Stand By You," all far exceeding expectations in both quality and integrity. The set contained further hits like "Brass In Pocket," deeper cuts like "Middle of the Road" and "Mystery Achievement," new single "Holy Commotion," as well as their take on the Kinks' "Stop Your Sobbing," which was the Pretenders' first single. The band finished the evening with a cover of the Jimi Hendrix "Room Full of Mirrors." It appears that Chrissie Hynde can rock with the best of them. Oh, and since it was the main talking point everywhere by everyone after that electrifying set, Chrissie Hynde is doing incredibly fine at 65.

It was soon time for the Enchantress herself, Stevie the Good Witch. The crowd was visibly excited; this was their generation's bewitching chanteuse. The one thing the crowd wasn't going to get was a lot of Stevie talking this time around, and she commented more than a few times that she was trying to keep her banter to a minimum. Still, though her vignettes surrounding each song were rather brief, they only served to enhance and evening that dug as deep into her recording history as possible. She made it very clear that this tour was going to be different, that this was going to be about songs not often played, that fans have pleaded to hear live for years, with some hits thrown in for good measure. 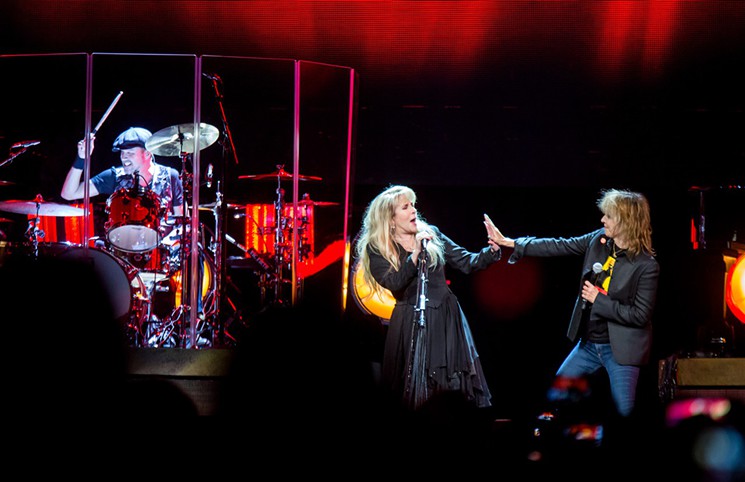 To be honest, it's one of the finer concert concepts going these days. I'd pay good money to see Neil Diamond do some weird stuff from his early days, or Neil Young for that matter — the idea being to appeal to the diehard fans with the deep cuts and obscurities. I'm not sure that anyone who is a fan of Nicks' entire career, with the Mac and solo, could have asked for a better evening or a better selection of songs. Opening with a cult favorite like "Gold and Braid" blew my mind nearly as much as the stage setting, which brought to mind a variety-show set from the 1970s. It would progress just as the set would. The crowd was on its feet for a song that's never been properly recorded in a studio. The second song was 1983's "If Anyone Falls," a minor single from her second solo album. I hadn't wanted to concentrate at all on the setlist for this concert, but it became apparent the set list was the experience.

"Stop Draggin' My Heart Around" didn't feature Tom Petty this time around, but Chrissie Hynde returned to the stage for a magnificent duet and one of the highlights of the evening. I'd say it gave me goosebumps, but I had those for nearly the entire set. The obscurity "Belle Fleur" followed, a demo her first album that she reworked on her most recent album 24 Karat Gold: Songs From The Vault. "Outside the Rain" was showing favor to Nicks' first solo album, Bella Donna, and rightfully so; it was an amazing debut outing.

Another detail should be mentioned at only five songs in: Stevie had gone through at least three capes or cloaks. This would continue throughout the evening. The crowd would go especially wild when she would dance and spin, edges of her cloak in hand.

The set was designed with pacing in mind, and dropping the first Fleetwood Mac song in the sixth slot was a good call, but so was the seamless transition from "Outside The Rain" to "Dreams." The crowd was on its feet. Some were handling it better than others, some were clearly getting drunk, some were approached by security. Still, you could taste the eruption of joy that washed over the audience. That said, for the most part, this crowd was every bit as excited about the Stevie hits and obscurities, like the title track from 1983's Wild Heart making its live debut and Bella Donna's title track being played for the first time since the early '80s. She wove her magic and dabbled in the mysticism of her own back catalog, pulling "Annabel Lee," "New Orleans," and "Moonlight (A Vampire's Dream)" from her 2011 album In Your Dreams, while mixing them with early tracks like "Enchanted" or revamped demos like "Starshine" and "If You Were My Love." Meanwhile, the Stevie Nicks live staple "Stand Back," which was inspired by Prince's "Little Red Corvette," was made all the more meaningful with images of Prince in the impressive light projections.

Going as deep into her catalog as there is, she pulled "Crying In The Night" from 1973's tragically out-of-print album Buckingham Nicks. It's a song that's never been played live before,  Waddy Wachtel, Nicks' musical director and longtime guitarist, had his heart set on taking this one out on the road. Nicks unleashed another Fleetwood Mac number with "Gold Dust Woman," and the crowd returned to their feet, if any had sat down. It was a fantastic number and a total nostalgia trip. Wachtel nailed the guitar part in no uncertain terms. The set ended with "Edge of Seventeen" from her first solo album and further projected tributes to Prince, before she bid us her first adieu.

For the encore, I expected a Mac attack, and when the opening chords of "Rhiannon" began, I was assured. I half-expected "Landslide" to follow, but something much better happened. She told the story of how she wrote the song "Leather and Lace" for Waylon Jennings and Jesse Colter, but when she found out they were divorcing she pulled it back. That's why their album Leather and Lace did not feature the song of the same name, which in my house was quite a mystery until we had both of the albums and probably heard something about it on the radio. It was an amazing song on Bella Donna, but live, more than 35 years later, it's even better and more moving, and Ms. Nicks finally moved this man to tears with a sentimental surprise ending to a truly spectacular evening.

The Crowd: I haven't been to a show in a while where I feel especially young. Often, I may well be the oldest dude there and I'm guessing that 80 percent of this crowd exceeded my years. That said there were kids of all ages from 15 to 93, but the bulk of the crowd was rich white money that grew up in the 1970s who the Older Boomers called the Me Generation. This was their arena, this was their music, this was the sound of the suburbs in the 1970s and 1980s.

Random Notebook Dump One: I figured out what bothers me about the name Talking Stick Resort Arena. It's confusing; I don't know half the time if people are talking about the arena or the actual resort and casino. It should just be called Talking Stick Arena. Everyone gets the association.

Random Notebook Dump Two:
I was going to mention the number of times I got chills on this goosebump-inducing aural adventure, but I couldn't even keep track after 10, and that was halfway through the Pretenders set. I should make an appointment with a neurologist about this.