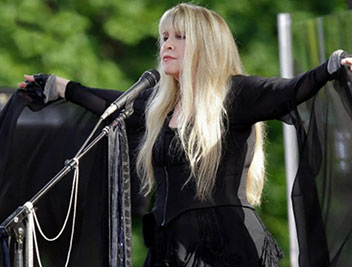 FLEETWOOD MAC will bring their On With The Show World Tour to Australia and New Zealand in 2015.

The On With The Show Tour will mark Fleetwood Mac’s first series of concert dates in Australia and New Zealand since 2009’s sold-out Unleashed Tour. Touring as a five-piece for the first time since 1998, one of music’s most enduring groups of all time, Fleetwood Mac, will play a selection of arena, stadium and winery shows this October - November. All five original band members are back together, with Christine McVie rejoining band mates Mick Fleetwood, John McVie, Lindsey Buckingham and Stevie Nicks after a 16-year absence.

The On With The Show Tour will see Fleetwood Mac on stage for close to two and a half hours, showcasing hits and classic songs from their career that spans more than four decades and global album sales in excess of 100 million, including songs such as: “The Chain”, “Dreams”, “Second Hand News”, “Rhiannon”, “Sara”, “Gold Dust Woman”, “Tusk”, “Looking Out for Love”, “Don’t Stop”, “Go Your Own Way”…and the list goes on and on.

Tickets for all shows go on sale at 10am on Wednesday April 1.

My Live Nation members can also be among the first to secure tickets during the pre-sale beginning at midday on Friday March 24 in New Zealand members and midday Monday March 30 in Australia. For complete details visit: www.livenation.com.au or www.livenation.co.nz.

TICKETS ON SALE 10AM WEDNESDAY APRIL 1